In 1766, William and Martha Bratton purchased 200 acres along the South Fork of Fishing Creek in present-day York County, South Carolina. During the American Revolution, the war came to the Bratton doorstep when a detachment of the British Legion was searching for Colonel William Bratton, a Patriot militia officer, in July 1780 which resulted in the Battle of Huck’s Defeat.

In subsequent years, Bratton had the Homestead House, slave houses, and the Brick House built for his growing family, enslaved population, and economic pursuits. He also directed the remodeling of his parent’s log house into the Brattonsville Female Seminary for the education of his daughters around 1839. Following his death in 1843, his wife, Harriet Rainey Bratton, took ownership of the “Home Plantation” and continued to manage the profitable cotton plantation through the American Civil War.

The ratification of the 13th, 14th, and 15th Amendments to the United States Constitution redefined the American South and Brattonsville. African Americans began to use their new-found citizenship and voice to become active members of the broader Brattonsville community. However, this change was hindered by the acts of the Ku Klux and other vigilantly groups.

Today, Historic Brattonsville’s preserved buildings, structures, and  landscapes reflect the lives of three generations of the Bratton family, their enslaved people, and other inhabitants of community including educators, skilled laborers, and, following emancipation, African-American Freedmen.

Historic Brattonsville presents three significant periods containing important milestones in the agricultural and social history of the American South. These periods include the Revolutionary Era, the Antebellum Era, and the Reconstruction Era.

In the spring and summer of 1780, the Revolutionary War moved full force into York County. On the evening of July 10th, Captain Christian Huck of the British Legion was sent to arrest Patriot leaders in the area with about 120 of his men, but many eluded capture. Huck’s forces headed for Colonel William Bratton’s plantation. On the way, the British confiscated food, horses, and other valuables from local families. Colonel Bratton was away with the militia at Thomas Sumter’s camp along the Catawba River. According to family tradition, Martha Bratton sent Watt, an enslaved person, to warn Colonel Bratton of the threat. The British troops arrived at the Bratton plantation on the evening of July 11th. They demanded to know where her husband was and when she refused to answer they threatened her with a reaping hook. Huck then angrily commanded that Martha prepare supper for him and his officers before setting camp at the neighboring William plantation.

The following morning, the Patriots surprised and attacked the British camp. When the first shots of the battle rang out, Huck dashed outside and hastily mounted his horse leaving his green dragoon jacket in the house. Several Patriot militiamen took aim and fired and Huck fell from the saddle. The battle was over in 15 minutes. The British casualties numbered approximately 30 killed and 50 wounded and a large number were then taken prisoner. Martha Bratton ministered to the wounded British. The destruction of Huck’s British forces helped revive the morale of the people in South Carolina at a time when British victory seemed inevitable and served as a rallying point for the backcountry Patriots. Huck’s defeat was one of a series of significant events that eventually led to the Patriot victories at King’s Mountain, Cowpens, and finally the British surrender at Yorktown.

The Bratton Plantation was established in 1766 by William and Martha Bratton but grew to the height of its productivity under the stewardship of their youngest son, John Simpson Bratton, Sr. and his wife Harriet Rainey. Like many planters in the Carolina Backcountry, the Brattons made the majority of their wealth through the exploitation of enslaved people of African decent.

The advent of the cotton gin in 1793 made cotton a viable cash crop in the Backcountry of South Carolina and, as a result, the wealthiest Backcountry citizens began to purchase enslaved people to plant and harvest cotton. William Bratton was no exception. 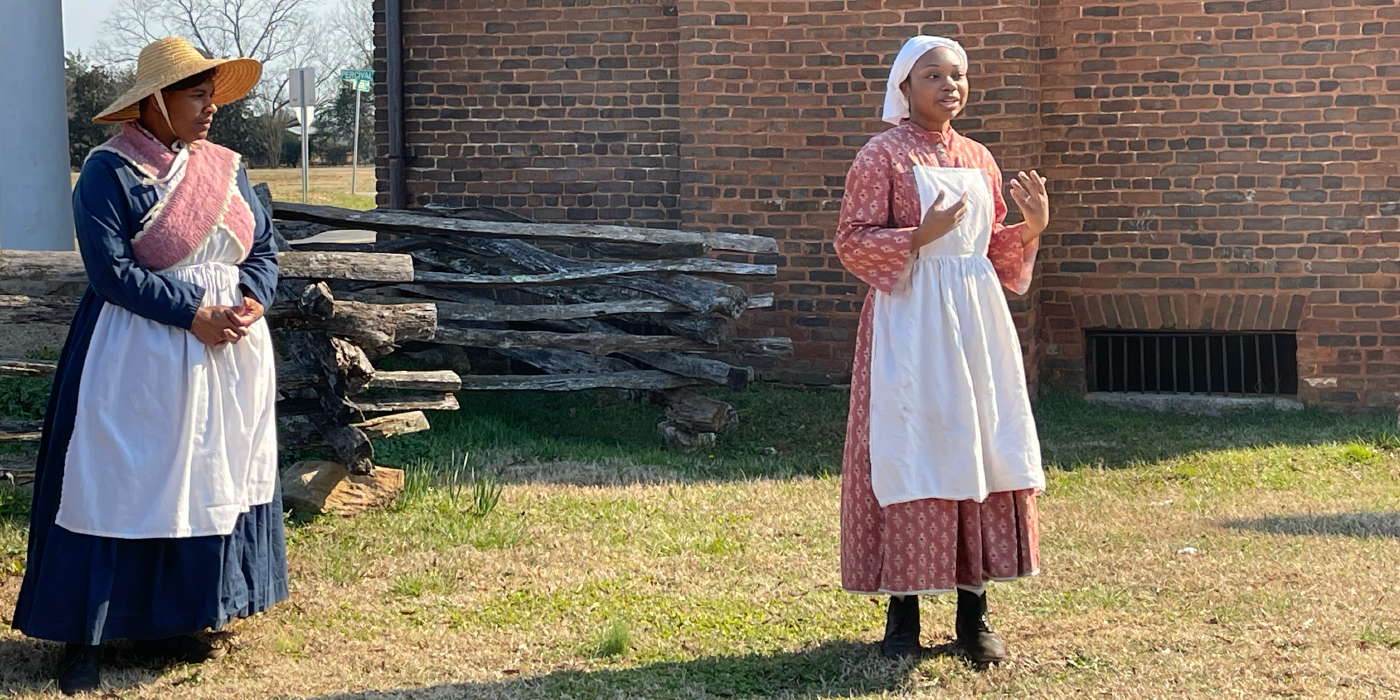 Family tradition suggests that Col. Bratton enslaved at least one person named Watt, as early as 1780. Over the next three decades, the enslaved population at Brattonsville grew. When the very first United States census was conducted in 1790, William Bratton owned 12 enslaved people. By 1810 the enslaved population on the Bratton Plantation had nearly doubled.

Following William and Martha’s deaths in 1815 and 1816 respectively, the Bratton plantation was bequeathed to their youngest son John Simpson Bratton, Sr. John also received four enslaved people from his father’s estate including Watt and his wife Polly. The remaining nineteen enslaved people were divided among John’s seven siblings.

In 1826, John and his family moved to a new two-story timber-framed house known today as the Homestead House. The Homestead House would become the center of John S. Bratton, Sr.’s, plantation. Shortly thereafter, he began an aggressive expansion of his land and wealth. By 1840, the Bratton Plantation consisted of 3,540 acres worked by 112 enslaved people.

Like the majority of enslaved people across the American South, it is likely that the enslaved people on Harriet’s Plantation ate a diet primarily consisting of processed corn, flour, or hominy, and smokehouse-cured pork. Supplements to their rations might have included fresh beef, mutton, poultry, and wild game, as well as seasonal fruits and vegetables. It is also likely that enslaved people were allowed to grow additional food in small gardens referred to as “truck patches.”

As on most cotton plantations, the enslaved field hands at Brattonsville likely worked in groups known as “gangs” that were constantly monitored by an overseer. Records indicate that there were at least two overseers on the Bratton Plantation: Elijah Clarke and Charles Curry. Enslaved field hands typically planted the cotton in March or April and over the next several months they carefully tended the plants. The Cotton bolls (the seed pods) opened in the fall, at which point they were hand-picked, gathered in bags and baskets, and taken to the gin house. The gin separated the cotton fibers from the seeds and the cleaned cotton was then taken to the adjacent cotton press where it was formed into a bale. The cotton bales, which weighted about 400 pounds each, where then shipped to market in North Carolina via Railroad and south to Columbia via wagon.

Following emancipation in 1865, Harriet, like many other planters, adjusted to the redefinition of southern labor and adopted a different economic institution known as sharecropping. Sharecropping gave newly-freed African Americans, known as Freedmen, the means to live on separate tracts of land and raise crops. In exchange for working the land, a share of the crop was owed to the landowner each year. A ledger of accounts kept by Harriet Bratton indicates that 16 families were sharecropping at Brattonsville. Many of these sharecroppers had been formerly enslaved by the Brattons.

The white members of the Bratton family continued to live at Brattonsville until 1915, after which many of the houses were rented to tenant farmers. Some of these tenants were formerly enslaved (or descended from the formerly enslaved) at Brattonsville. Most of the tenants moved out by the 1950s, leaving the houses unoccupied for nearly two decades.