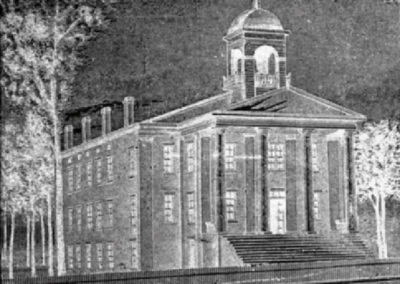 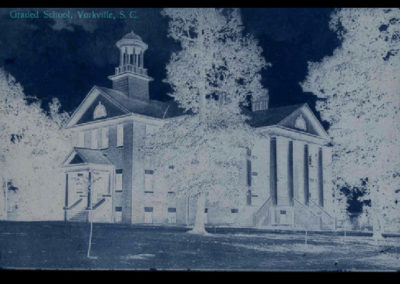 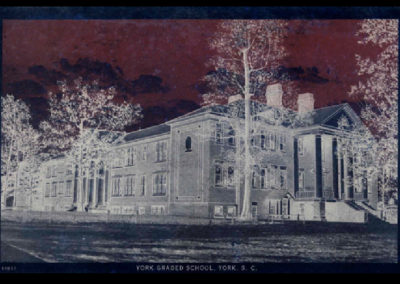 Founded by the Bethel Presbytery in 1852, the Yorkville Female Collegiate Institute was located on what is now the McCelvey Center campus. The front of the three-story brick building, constructed in 1853, faced northwest towards the Historical Center of York County. Located in a beautiful grove the building consisted of a large hall for exams, recitation rooms, and some private rooms for boarding students. It was one of South Carolina’s leading schools for women when it opened on January 16, 1854. The school paused operation from February 1863 until February 1864 while Principal Rev. J. Monroe Anderson volunteered as a chaplain of the 12th Regiment of SC Volunteers, and the building housed Civil War refugees from 1863 until 1866. Students returned to the school in 1867 now known as the Yorkville Female College.  In 1882, boys were admitted and the school became known as the High School for Boys and Girls.

In December 1888, the State of South Carolina passed an act to create free public schools and York School District was the second public school system established in the state. The school reopened as the Yorkville Graded School in 1889 as a public school for grades 1-6 and higher. After the building was partially destroyed by a chimney fire in 1900, it was rebuilt in 1902 on its original foundation with modern conveniences of electricity and plumbing. When the town shortened its name from Yorkville to York in 1915, the school became known as York Graded School, where George C. McCelvey was principal from 1912 to 1948. His 36 year-tenure included leave to serve in World War I where he earned a Purple Heart and the Distinguished Service Cross.

The school’s central portion and east wing were added in 1922 to include an auditorium, new classrooms, and a new entrance portico facing East Jefferson Street. From 1935 to 1968, a cannery operated on the school grounds to encourage home canning of fruits and vegetables. The school served as both an elementary and high school consisting of grades 1-11 until 1947 when grade 12 was added. It became York Elementary School when the high school moved to another location in January 1951. The building was renovated in 1956 with new fireproof stairwells, and a new annex was built on campus for primary classrooms and a cafeteria.

Under the Civil Rights Act, all school districts were ordered to submit desegregation plans by July 1, 1965 and York Elementary School was open to African American students beginning in 1965. York School District One achieved full integration in the 1970-71 school year by reorganizing existing facilities to create a school system where there would be only one school for students to attend based on grade level. York Elementary School accommodated all students within the district in grades 1-4.  The building was renamed McCelvey Elementary School to honor former principal, George McCelvey, after his death in 1973. As a York School District educational facility, the last day of school held in the building was June 4, 1987 and ownership of the building was turned over to McCelvey Center, Inc. of York County for use as an arts and community building.

Culture & Heritage Museums was granted stewardship of the McCelvey Center campus in 2001. In addition to the 154 original windows restored in 2020, the historic building retains its original hardwood floors, and many classroom chalkboards. Renovations of the auditorium in 2007 included window repairs, a new stage floor, new main curtains, new sound and lighting system and a digital projection system. In 2011, restrooms were modernized and a new slate roof was installed. The annex, renovated in 2013, opened as the Historical Center of York County in 2014. 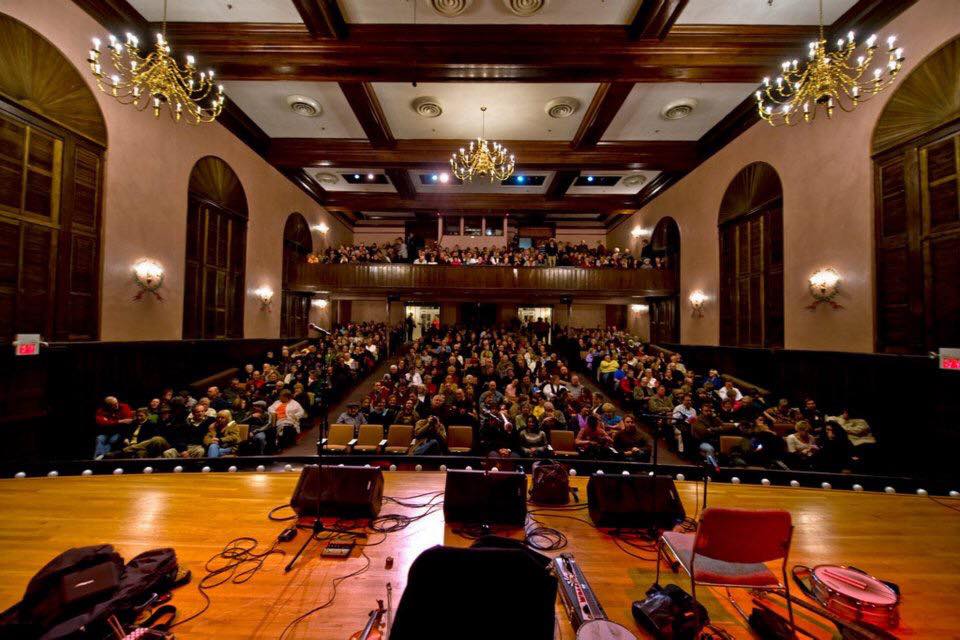 Presenting the heritage of the Carolina Piedmont and enriching the community through the performing arts.

The McCelvey Center is the original site of the Yorkville Female College founded in 1852 and includes the 500-seat Lowry Family Theater. Noted for its remarkable acoustics, the historic theater has a warm ambiance and hosts the annual Southern Sound Series. The mission of the Lowry Family Theater is to present the unique heritage of the Carolina Piedmont through the performing arts while maintaining a quality venue for community enrichment.